On August 18th, 2013, my family experienced the heartbreaking loss of our oldest daughter Christina at the young age of 27. It was the defining moment of my life. The principles that I now call Trust, Faith and Change allowed me to continue living in such a way as to allow the relationship with my daughter to continue and her story to live on. Christina always had a heart for helping those who could not help themselves and I feel her close as I engage with the orphaned, the impoverished and the marginalized, those whose stories I tell.

On August 18th, 2013, my family experienced the heartbreaking loss of our oldest daughter Christina at the young age of 27. It was the defining moment of my life. The principles that I now call Trust, Faith and Change allowed me to continue living in such a way as to allow the relationship with my daughter to continue and her story to live on. Christina always had a heart for helping those who could not help themselves and I feel her close as I engage with the orphaned, the impoverished and the marginalized, those whose stories I tell.

These three principles that God laid on my heart, allowed me to continue living and breathing at a time I thought I could not.

The principle of trust helped me come to the conclusion that I will never understand with my human mind why Christina’s time was cut short, but I know that for whatever the reason, God gave me time and I want to use it to honor and glorify him. Trusting God in something we will never understand allows us to live a life of gratefulness instead of bitterness. It allows us to see each day as a gift from God, to see our lives, Christina’s life and the lives of everyone we meet as a miracle and to realize that we are all here for a divine purpose. It allows us to be grateful that God gifted our family with a Christina for 27 years rather than be angry and bitter over her time being cut short.

Trusting God in matters that we simply cannot understand changes our lives and how we live them.

Faith allows us to realize that You cannot leave someone behind who has gone on ahead. That Christina is not back there in the hospital where our family sat beside her for two months and ultimately witnessed her passing. Christina is in heaven and in a very brief time, we will see her again.

As a Christian, Christina is a victor, not a victim. The principle of faith allows the relationship with our lost loved ones to continue and their story to live on.

Focusing on change instead of pain allows me to ask myself daily “how have I changed” rather than “how do I feel”.  How have I allowed the pain of this unbearable loss to mold me into more of the person that God wants me to be.

The series of events that have evolved in my life after learning to fully trust God’s sovereignty and power through the principles of Trust, Faith and Change have been nothing short of a miracle.

Realizing that I could do nothing to change what had transpired, I focused instead on what I could do now to honor God as well as continue my daughters legacy of helping others.

For inspiration I had no further to look but to my daughters actions 9 years prior when she listened to her heart and took action, changing the life of a little boy half way around the world in India.

Christina was in her first year at Samford University in Birmingham AL, she was at a Compassion International sponsored event where she heard their story of “Releasing children from poverty in Jesus’ name”.

True to her nature, Christina listened to her heart and took action, sponsoring little 8 year old Satish in Chennai India. 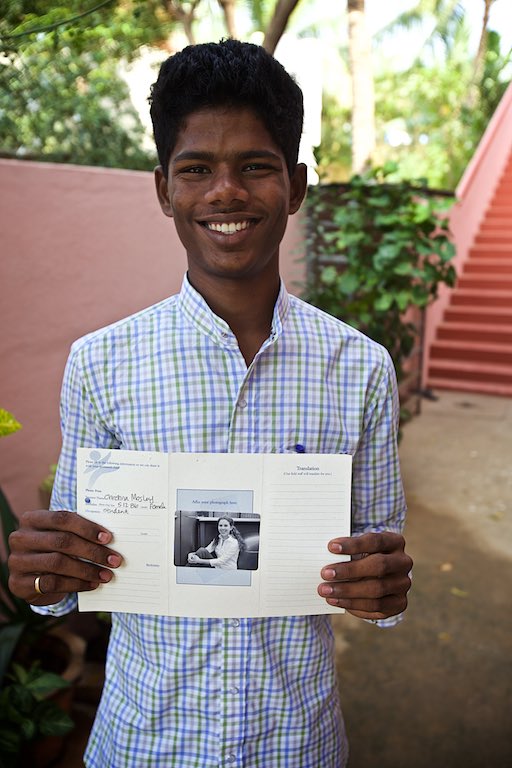 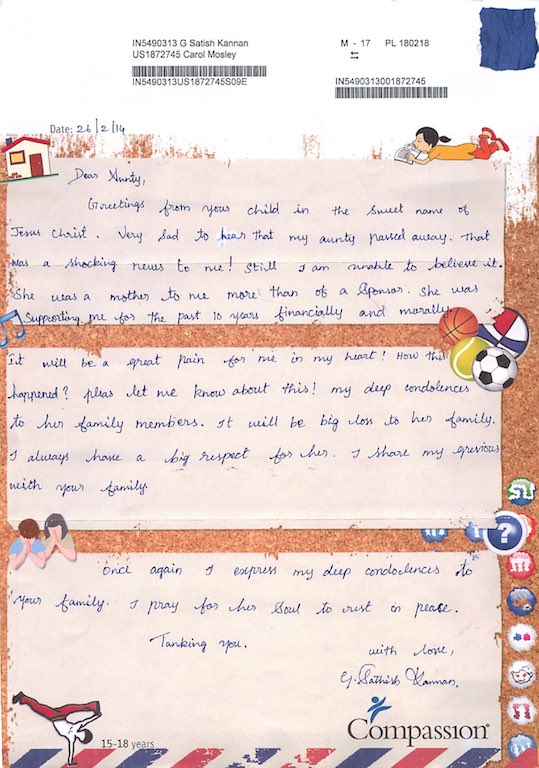 For Christina it was about so much more than the $38 that she paid monthly from her own earnings, it was about a relationship that she formed with Satish over those 9 years through writing him letters, letters that he always responded to with one of his own.

Nine years after Christina sponsored 8 year old Sathish, she passed from this earth and it was now my turn to listen to my heart and take action. I called Compassion International and took over sponsorship of Sathish, in the process they had me write Sathish a letter informing him of his sponsors passing.

Satish wrote back and  communicated to us that Christina was much more than a sponsor, she was more like a mom, encouraging him through very difficult times in his life and always pointing him to Christ.

I called Compassion and shared this story with a dream in my heart of going to India and meeting him and seeing first hand the difference Christina had made in his life.

Before I had a chance to ask they said “Ronnie, would you consider going to India to meet Satish, we would love for this story to be told in our magazine that reaches over 1 million in circulation.

I wept as I felt God going before me, opening doors to opportunities I had never dreamed possible.

So I listened to my heart and flew to a country I had never been, to tell the story of how one girl in America changed the life of a little boy half way around the world, by listening to her heart and sacrificially giving to a boy whom she had never met.

Meeting Sathish was a moment I will never forget. We both shared a mutual love and appreciation for Christina, we had both been impacted by her life in a deep and meaningful way and that shared connection was powerful. 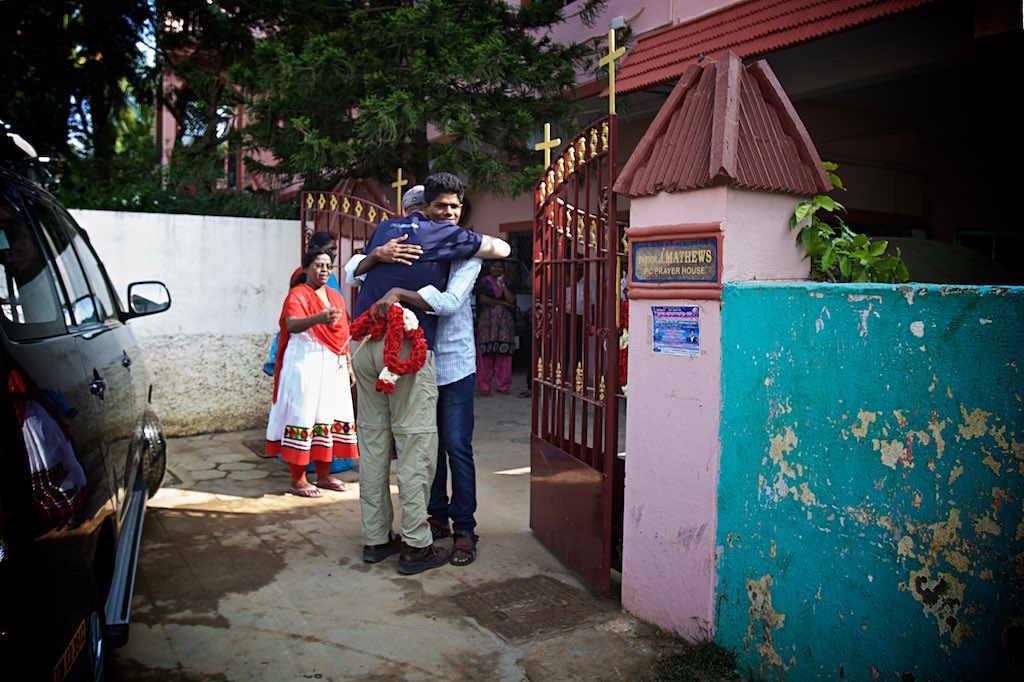 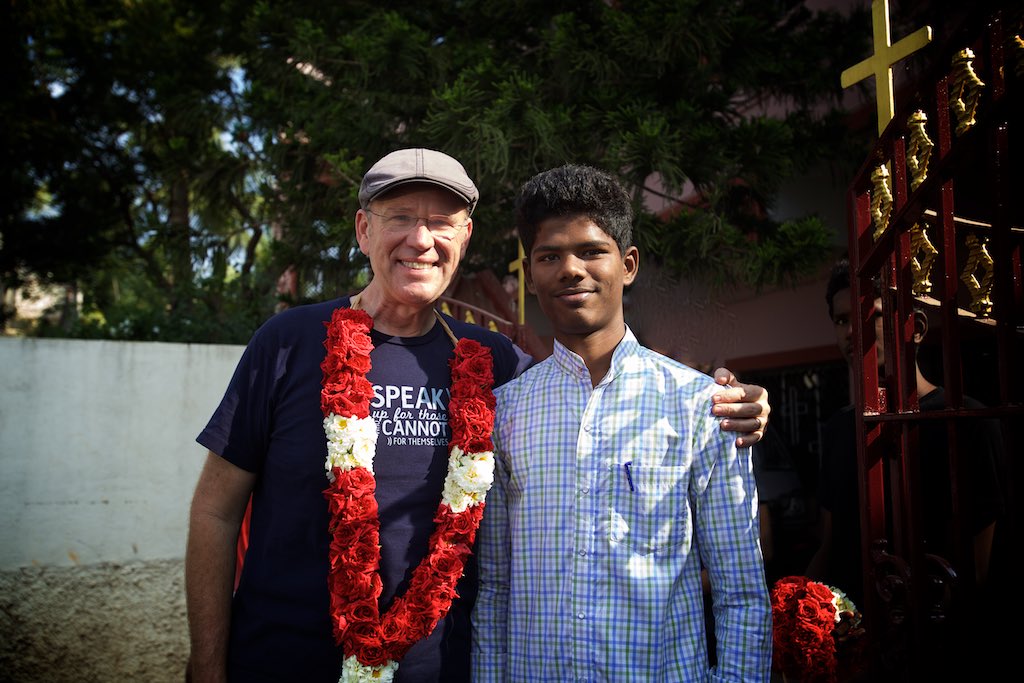 There were two things that stand out the most from my visit with Satish.

The first was a two inch thick folder that lay in front of us on the table. I was deeply moved to find that the reason for the thickness of the file was that it contained all 10 years of Christina’s letters with Sathish’s reply attached to each one. What touched me the most was the initial letter Christina sent him 10 years ago with her high school graduation photo attached. I was provided with copies of all the letters, allowing me to return home with a fresh treasure trove of Christina’s writings to add to all the little treasures I had already collected since the day she was born.

The most inspiring moment was when Sathish openly shared his testimony of how he came to accept Christ into his heart at the Compassion project at the age of 14. He shared how it changed the way he saw others and it changed how he saw himself. When I thought about that, I could think of no better way to describe what happens when Christ comes into our lives.

The ripple effect of Christina’s listening to her heart and taking action inspired me to start Capturing Grace.

Capturing Grace is non profit, dedicated to telling stories of those who feel the pain of poverty, disease, and injustice.

Since my daughters passing four years ago, I have traveled through twenty nine countries and over a quarter of a million miles, telling stories with photographs and words of God’s grace in action. Sharing my testimony as I travel the world is one of life’s greatest joys, even though it has come as a result of one of life’s greatest heartbreaks.

As I travel I have learned that stories are important, hearing the stories of others puts our own lives into perspective. Stories tell us who someone is and they tell others who we are. In the process of sharing stories we find out that we are not alone in our pain, in our grief and in our loneliness. 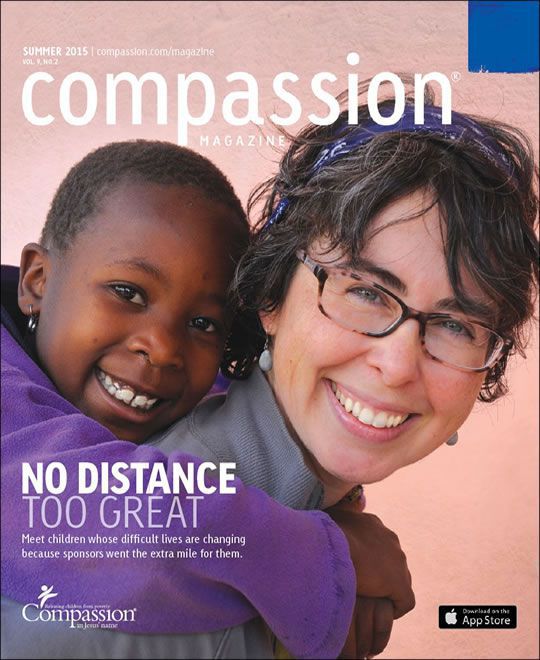 Stories encourage, they inspire and in the end, they can give us hope.