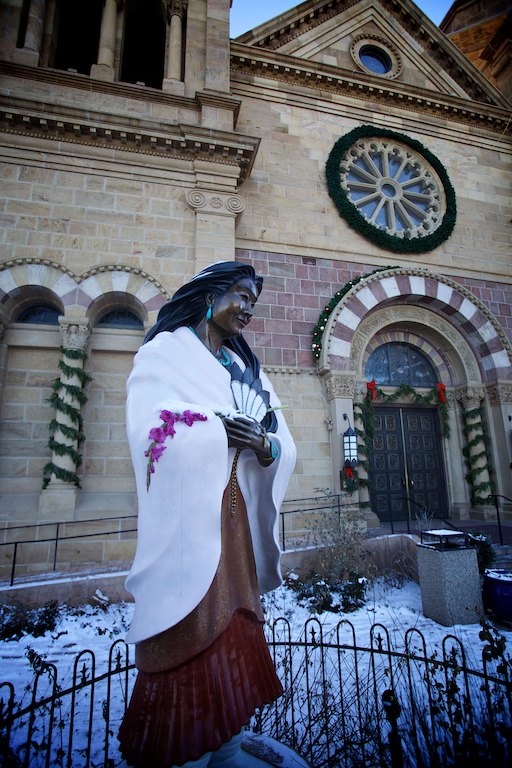 Posted at 09:30h in Christina by rdmosley 0 Comments
Share 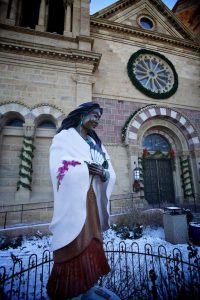 Upon our arrival to Sante Fe New Mexico last night and after checking into our hotel a block away from the square, I went for a walk to see the beautiful Christmas lights and luminaries that Sante Fe is famous for this time of the year. The rest of my family could not bear the 12 degree cold but I continued walking and meditating. I was quite taken by The Cathedral Basilica of St Francis of Assisi and took several photographs. I was touched by a statue that stands in the shadows of the Basilica of an indian women by the name of Kateri Tekakwitha. I took some night photos and left feeling very close to Christina. I attributed it to nothing more than my usual evening tiredness which always causes emotions to be strong and I find myself either talking to Christina, weeping over her earthly loss or just meditating; and then there are also the emotions of feeling very close to Christina anytime I witness objects of great beauty and grace. Tonight, walking around The Cathedral Basilica of St Francis of Assisi and the statue of Kateri Tekakwitha, I was in the presence of both.

The next morning I awoke early and quickly donned my clothes and felt drawn back to the cathedral and its beautiful grounds. Packing my camera gear I wanted to take more photos in the morning light. I loved looking at all the angles and compositions made available by this beautiful structure but continued to be moved by the statue of Kateri Tekakwitha. Succumbing to the 14 degree bone chilling air I retreated into a nearby french bakery for a a cappuccino and a raisin au pain. While uploading my photographs I googled Kateri Tekakwitha and read her beautiful and moving story. I hope that you are moved and inspired by her compelling story as well.

Kateri Tekakwitha was a young Mohawk woman who lived in the 17th century. The story of her conversion to Christianity, her courage in the face of suffering and her extraordinary holiness is an inspiration to all Christians. Follow us as we share with you the life of Saint Kateri Tekakwitha, the first Native American Saint in the United States of America and Canada.  Her Shrine is located in Fonda, New York. This National Shrine was created to honor Kateri and the Native peoples north and south of the border, for it was here that she was baptized on Easter Sunday April 5, 1676, and lived her teenage years.

Kateri was born in 1656 of an Algonquin mother and a Mohawk Chief in the Mohawk village of Ossernenon (modern day Auriesville) in upstate New York. When she was only 4 years old her parents and brother died of smallpox. Kateri survived the disease, but it left her face badly scarred and her eyesight impaired. Because of her poor vision, Kateri was named “Tekakwitha”, which means “she who bumps into things”. Kateri was taken in by her uncle who was bitterly opposed to Christianity. When she was 8 years old, Kateri’s foster family, in accordance with Iroquois custom, paired her with a young boy who they expected she would marry. However, Kateri wanted to dedicate her life to God by remaining single and offering her life to Jesus.

When Kateri was ten, in 1666, a war party composed of French soldiers and hostile Natives from Canada destroyed the Mohawk strongholds on the south bank of the Mohawk, including Ossernenon. The surviving Mohawks moved to the north side of the river and built their fortified village about half a mile west of the present village of Fonda. Kateri lived in Caughnawaga, site of the present Shrine, for her next ten years.

When Kateri was 18 years of age, she began instructions in the Catholic Faith in secret. Her uncle finally relented and gave his consent for Kateri to become a Christian, provided that she did not try to leave the Indian village. For joining the Catholic Church, Kateri was ridiculed and scorned by villagers. She was subjected to unfair accusations and her life was threatened. Nearly two years after her baptism, in St. Peter’s Chapel at the present Kateri Shrine in Fonda, she escaped to the Mission of St. Francis Xavier, a settlement of Christian Natives in Canada. The village in Canada was also named Caughnawaga (Kahnawake). Here she was known for her gentleness, kindness, and good humor. On Christmas Day 1677 Kateri made her first holy communion and on the Feast of the Annunciation in 1679 made a vow of perpetual virginity. She also offered herself to the Blessed Mother Mary to accept her as a daughter.

During her time in Canada, Kateri taught prayers to children and worked with the elderly and sick. She would often go to Mass both at dawn and sunset. She was known for her great devotion to the Blessed Sacrament and to the Cross of Jesus.

During the last years of her life, Kateri endured great suffering from a serious illness. She died on April 17th, 1680, shortly before her 24th birthday, and was buried in present day Kahnawake, Quebec, Canada. Tradition holds that Kateri’s final words were. . .”Jesus,  I love you”, after which she embraced her creator for all eternity.

Witnesses reported that within a few minutes of her death, the pock marks from smallpox completely vanished and her face shone with radiant loveliness.

Before her death, Kateri promised her friends that she would continue to love and pray for them in heaven. Both Native Americans and settlers immediately began praying for her heavenly intercession. Several people, including a priest who attended Kateri during her last illness, reported that Kateri had appeared to them and many healing miracles were attributed to her.

Fifty years after Kateri’s death the first convent for Indian nuns was established in Mexico and they pray daily for Sainthood for Blessed Kateri. Their prayers were answered on October 21, 2012 when Kateri was canonized as the first native american woman to be honored with sainthood.” 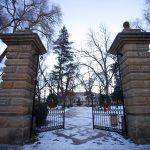 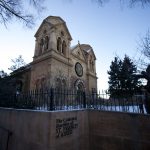 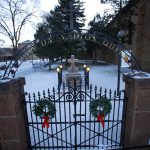 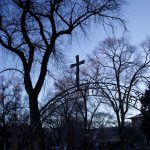 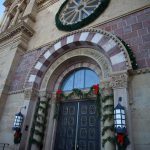 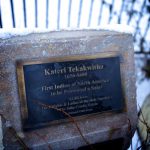 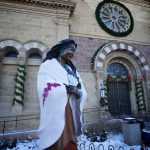