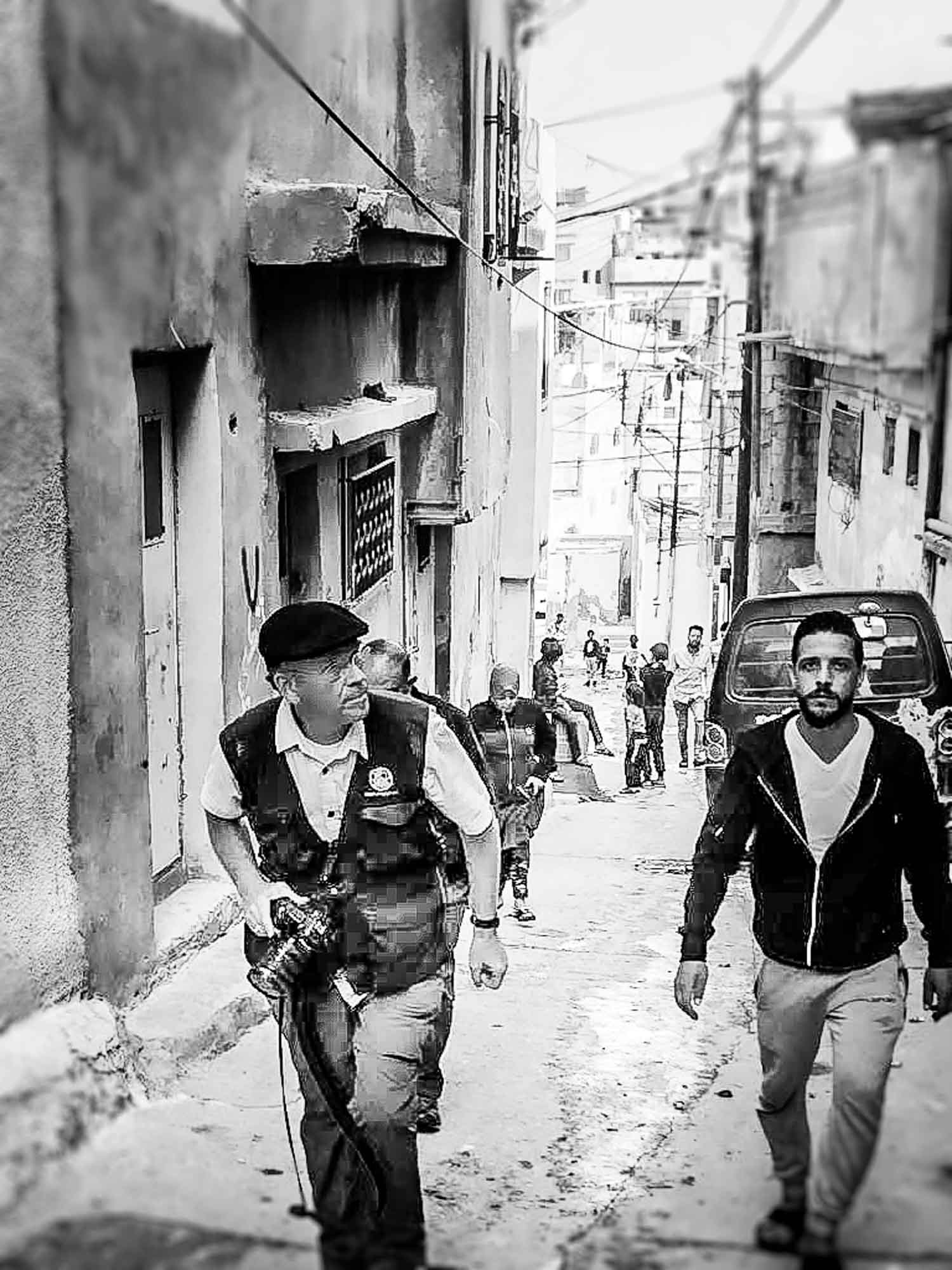 During my time in Jordan I heard stories from refugees who have survived a great deal. While every story was unique, there was a common thread, lives interrupted by forces far beyond their control, refugees who are now grateful just to be alive. Iraqi’s forced out of their country by Isis for not renouncing their faith in Christ, Palestinians without a country, searching for an identity, a place to call home.

During amy time at Hope and Trust , a ministry that assists Iraqi refugees find permanent citizenship, I spent two hours with Rita, learning her story of being an Iraqi refugee who survived the unimaginable after being sold into slavery by Isis and ultimately escaping. I tell Rita’s story just as she told it during our two hour recorded interview. I have so much respect for this amazing lady who refused to renounce her faith in Christ, even while being beaten by her captors.

Rita Habib’s story in her own words –

In 2014, I was living in Iraq in a small village called Karkoush. Our village was safe because we lived in Ninevah plains, we used to hear of incidents happening in Baghdad but never in the plans of Ninevah.

In the middle of June, Isis attacked the Sinjar mountain, we had just watched it from the TV, we were not hurt. When we felt the attack on the Yazidhis (by Isis), me and my family decided to go to Talkayf. We lived in a church there for one month. In that church, the Christians stayed in the basement and the upper floor was all full of Yazhidis, Sunnis and Shiyats. The Christians on the bottom, we all slept one by one all together. Isis came closer to the location of the church.

After a while, Isis started attacking Talkayf and everyone there evacuated. So the pastor asked the inhabitants to leave because it was no longer safe, 2 guards of the church were attacked by Isis, one killed, one attacked. The pastor helped many families to flee to Turkey, me and my father among them. My father and I were sure we wanted to go to Turkey, but it takes one week to get the visa, so in the meanwhile we visited my cousin who tried to convince us to go to Baghdad because my father is elderly. But I refused to go to Baghdad and decided to go to Turkey because the Baghdadi in his speech was very clear he was going to attack Talkayf. So I went to Turkey, and my father went on to Baghdad. We went by buses with other families. I stayed with some families on the island of Ylva and my father went back to his village in Karkoush because he thought it was safe for Christians as they were only attacking Yazhidis.

In the meantime, while I was in Ylva, I was in contact with my father, sometimes he would say ‘come back it is safe’; other times, he would say ‘no it is dangerous come pick me up!’

During the few weeks that I spent on the Turkish border, Isis attacked Karkoush again. Again, Isis attacked Karkoush, but some families preferred to stay because they were under the control of Peshmarge, other families evacuated fearing the attack of Isis again. So my father decided after 3 weeks, please come pick me up because Isis is very very near.

On that day, when my father called me back to Karkoush, I was planning to go there and back to Istanbul, Turkey. So I took the bus and everyone on the bus wanted to go to different places but the bus broke down and we waited the whole night on the road. In the morning, we tried to take a taxi, but no taxi would take us to Karkoush because of fear of Isis. One taxi finally agreed but charged me double, I agreed because I just wanted to get to my fathers house. When I arrived to my village, the Peshmarge was there and it was in a way, safe. So, I reached my house at 7:30.

When I reached the edge of the town, the Peshmarge was there at a barricade and they refused to let my taxi go on so I took my luggage out and went on alone. But still, the Peshmarge refused to let me go past the barricade and let me in. I said “ I must get to my father for he is elderly”. I gave them my identity and passport. So when they saw that the passport was stamped by Turkish border they said no you must be with Isis, here to cause trouble. When I heard that I snatched my passport and ID back and said no I am entering my village no matter what you say!

I walked past and entered my village and got to my fathers house. I stayed there with him until 3 in the afternoon. I went to the market to get things ready to escape the next day. Everything at the market was normal, life went on as if nothing had happened. While at the market I heard bombs going off in the village. When the bombings and bullets started, 2 kids were killed on the eastern side of the village, some were wounded. I was frightened. People in my village were dying. I decided to wait till tomorrow to leave the village and to leave very early the next morning. The clashes and bombings continued until 6pm that day.

Isis came into the village from one side and the Peshmarge responded from the other side and the Kurdish got involved in the clash so there were fightings surrounding my house from all sides. People who had cars fled to Duhuk or Ereil but I stayed with my father at home. I knew the clashes would continue all night. I was ready and packed to go in the morning.

At 6 in the morning we heard cars going around the house calling Allah Akbar, the Muslim call to prayer, signifying Isis. So when I opened my window and saw Isis people on trucks fighting with guns and calling Allah Akbar I knew they were under Isis control. I stayed in the house for several weeks. They called to everyone in the houses and commanded that they all go to the mosque. Men were separated from women at the mosque and the women were taken in trucks to Mosul at an Isis camp.

There is a person called Wali (title) responsible for selling women and giving them to Isis members. I was sold to Amir (“prince” military title). I stayed with him for 1.5 years in Mosul. Then I was sold to another Amir in Raqa, Syria.

The borders were open between Iraq and Syria between Isis members. I was there for 7 months then I was sold to a Saudi Amir. Each Amir is responsible for some work such as managing captured people, military work etc. I spent one month with the Saudi Amir then he took me back to Mosul and I stayed with him there for 2 months. Then we went back to Syria.

Then there were bombings and crashings so we moved to Almayden, Syria. We stayed 2 more months there then moved to Deiralzor where we stayed a long time, 5 months. We witnessed the clashes that happened between the Syrian army and Isis.

In the meanwhile, an organization called Yazda, they used to buy Yazhidi women and take them back to Iraq through smugglers, to free the women. A christian organization called Shlomo worked through Yazda to buy and free christian women too. I ran away with a yazhidi woman smuggler. When they reached the Syrian/Turkey border Talabyad, the first smuggler handed us to another smuggler. I wondered why they were going into Turkey, they were supposed to go to Iraq, so I called the first smuggler, to ask him why, and we found out they must go through Turkey to avoid human trafficking. The smuggler, after he discovered the scam of the trafficking, handed Rita to the Yappage (Syrian army) and they took me to Kamshly, Syria. Then they sent me to an Assyrian christian women Union in Syria. I stayed with them there, they took care of me and made sure I was okay and then they moved me to Almalkiah, Syria. I stayed there for 5 months.

They searched for Amir’s family to come and take me but they found out my father was still in Iraq. In 2018 I entered to Iraq through Cmalka. Because I had no ID I stayed on the border. On that border they took me to the secret police (like CIA, to oppose ISIS) in Iraq and I told my story and identified ISIS men. I stayed for 4 hours telling them everything. The Christian organization Shlomo took me to be with my father.

Because we had no ID I made a new ID card. I went to the Iraqi authorities for the ID card and they refused, because I was born in Karakoush and couldn’t prove it. I went there to find anything that could prove my ID and fortunately I found my passport and Iraqi national citizenship card. A christian organization- NPU- found them in a bag left by ISIS.

“I went through very bad experiences but I thank God I am still alive and that I have learned from all my experiences. I thank God I could see my father again. Maybe this was a cause to let me be open to other parts of the world, there is a reason I am here, and I am happy here. I am thankful that God is still with me, he is patient with me in suffering, and I feel him in my life.”
-Rita

Information about Hope & Trust –   Hope & Trust started in 2006 as a response to the arrival in Amman of large numbers of Iraqi Refugees. It continues today to serve the ever increasing number of Arab Refugees who still seek refugee in Jordan. Based in Amman, the Hope & Trust Team of volunteers are the local partners of Hope Fund in the UK.

Motivated by God’s love and compassion, we seek to stand alonside those who are most vulnerable as a result of their experiences. Support is offered on the basis of need alone, regardless of race or religion, and encouragement is given to build for a future in hope. We are the only group that assists refugees with asylum / resettlement procedures without cost.

“While every refugee’s story is different and their anguish personal, they all share a common thread of uncommon courage – the courage not only to survive but to perserve and rebuild their shattered lives.” – Guterres, Antonio – UNHCR High Commissioner

If you are as moved as I was by Rita’s story, I invite you to learn more about the ministry of Hope & Trust and consider donating to this beautiful ministry that is changing lives in Jordan.

A special thank you to Salam Gammoh for introducing me to Hope & Trust and facilitating Rita’s story. Salam was an  amazing host during my time in Jordan and I am so grateful for her and her family. I also wish to thank David Rihani for advocating on behalf of the refugees. Thank you David for crossing all boundaries to bring help to those in need. The photographs below were taken during my time with David and Salam in refugee camps.