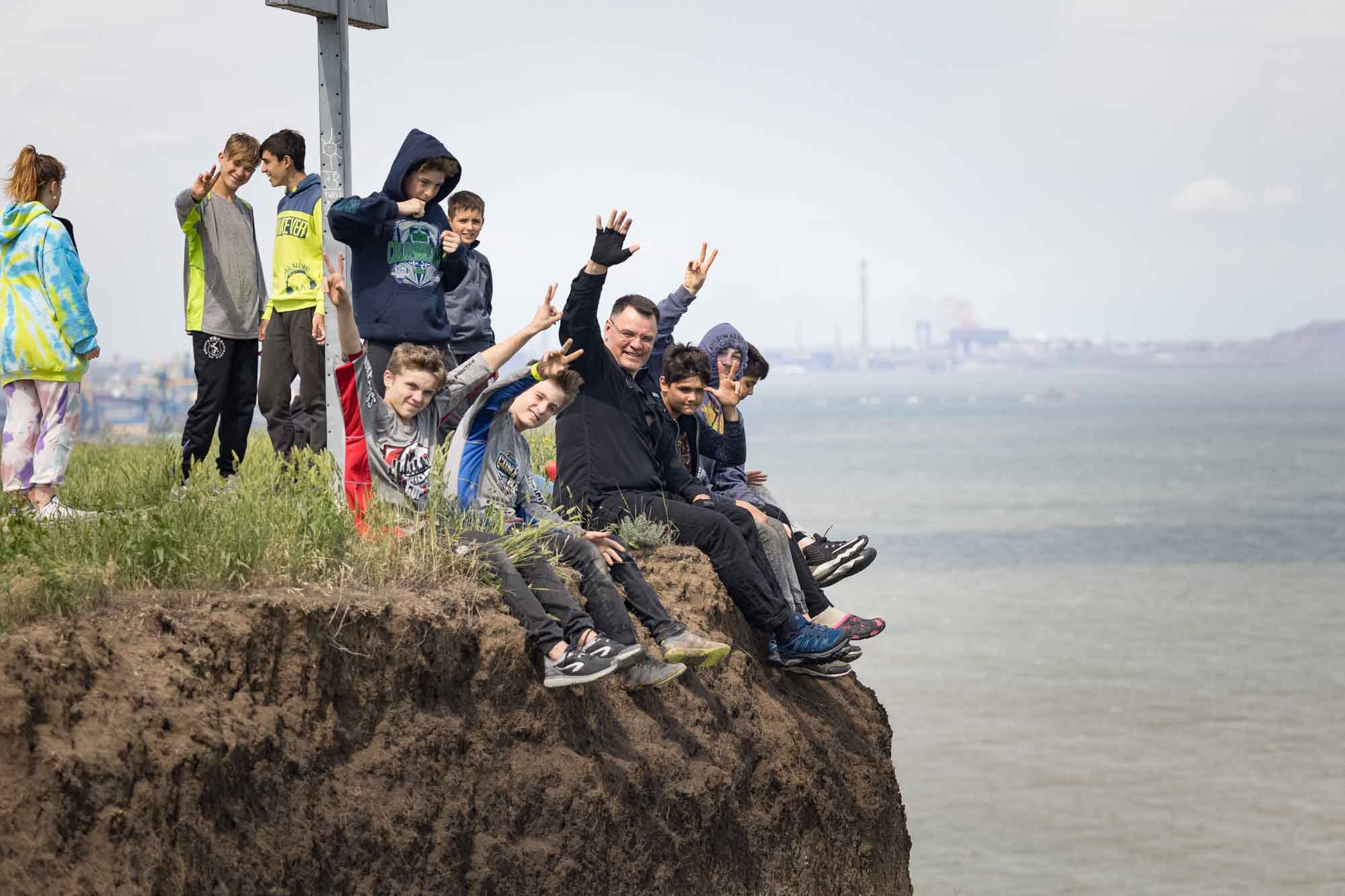 Capturing Grace on a 23 day journey through Ukraine and Greece, Photographing at Pilgrim Republic for SOW

In case it’s not obvious, I am in love with traveling the world, capturing images that tell a story of God’s grace, love and mercy.

Our experiences at fathers house were unforgettable, so many sweet people whose stories, kindness, and hospitality left Rebecca Chapman and I longing for more time. It was hard to say goodbye but our schedule required us to move on to the next destination.

Our Fathers House host, Nataliya Chesnova, made the transition much easier for Becca and I by navigating the maze of train choices and guiding us into our cabin for the 14-hour overnight journey to Mariupol. Thank you Natasha for leaving little bags of love from Father’s house in the form of delicious sandwiches, we could not be more grateful to you and all of our Fathers House friends. Mine and Becca’s focus now turns to the ministry of Republic Pilgrim and the work being carried out by an unconventional pastor in Mariupol, Gennadiy Mokhnenko. Republic Pilgrim brings help and hope to those who live on the front lines, in the war zone that lies between Russia and Ukraine.

It was here that the tragic massacre of over 10,000 innocent Ukrainians took place at the hands of a planned military invasion from Russia in March 2014. Mine and Becca’s trip to the front lines was put into jeopardy only weeks ago when Russia amassed a build-up of tanks and troops. Prayers were answered for de-escalation and for that we are grateful.

Having spent time during 2017 in this war zone, photographing for a ministry that assisted IDP’s (internally displaced people) with food, counseling, and a shoulder to lean on, I am aware of the difficulties that lie ahead for Becca and I on this journey.

The people we will be spending time with still live in great fear from what they witnessed, and lost, in 2014. The impact of tragedy does not end with the event from which you were traumatized. Once your brain, heart, and soul experience an unexpected and senseless tragedy you no longer see life as you did.

During our 14 hour overnight train ride from Kiev to Mariupol I had ample time to reflect on times with one of my hero’s, Gennadiy Mokhnenko.

Having seen the award winning documentary, Almost Holy back in 2016 , I was in awe of this unconventional pastor in Mariupol before we even met.

Gennadiy doesn’t waste a lot of time taking public opinion polls and trying to decide what to do. He listens to his heart and takes action, pulling kids off the streets who were dying from heroine overdoses and hooked on all manner of drugs and deadly addictive behaviors. He provides relief to homeless IDP’s (internally displaced people) on the front lines. The list is too long for this post but It’s all documented in the award winning documentary, Almost Holy. You can see the trailer here.

My favorite line from Almost Holy?

“This is not God’s problem, this is my problem!”.

Ever since crossing France (2017) and the USA (2018) on a bicycle with Gennadiy and his 31 adopted boys from Ukraine, my heart has longed to visit his hometown of Mariupol.

I have seen the documentaries, but really, how does one care for over 40 adopted children and run a home with 40 more? What does that look like? My imagination just could not fill in the blanks. 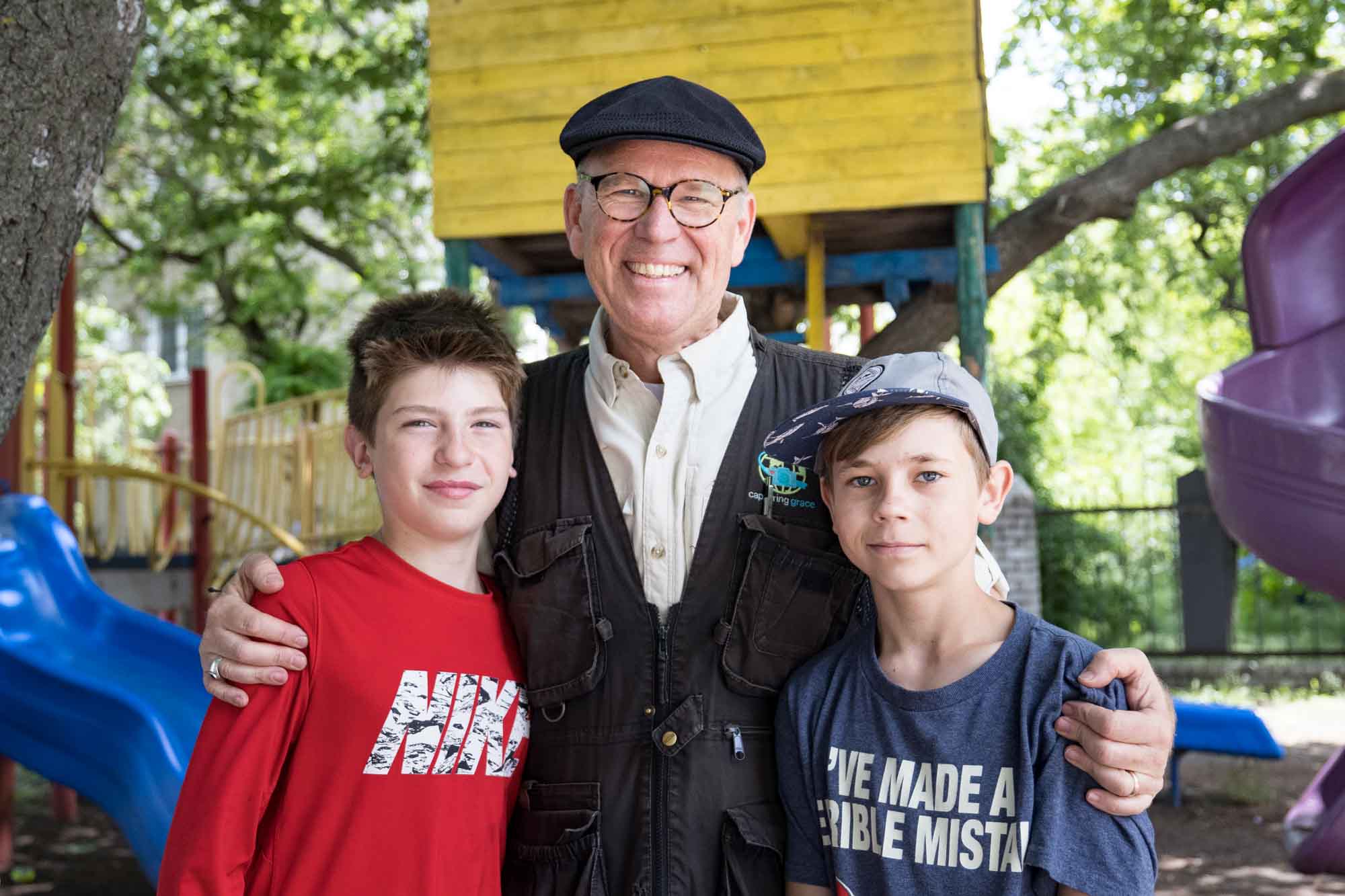 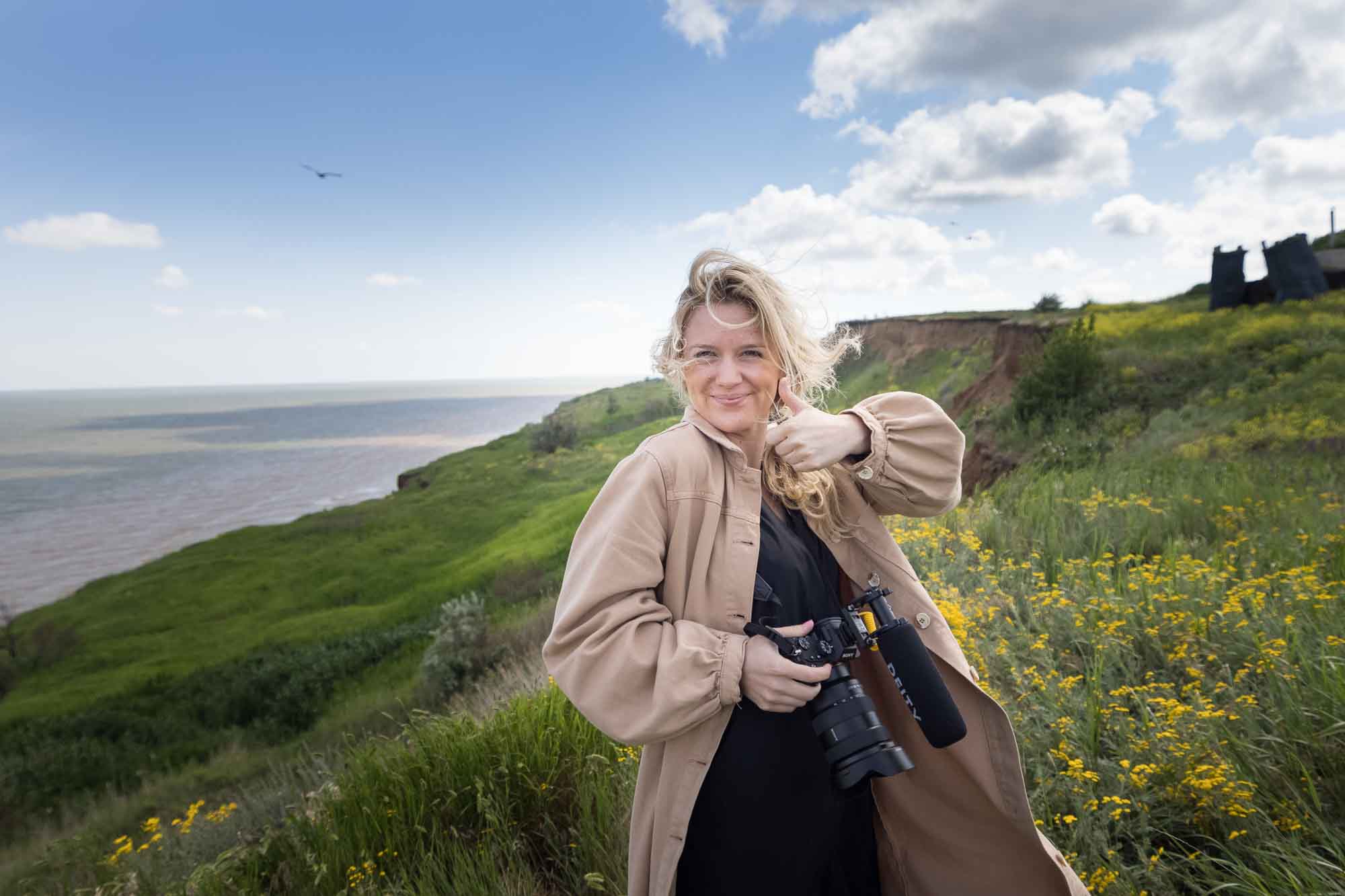 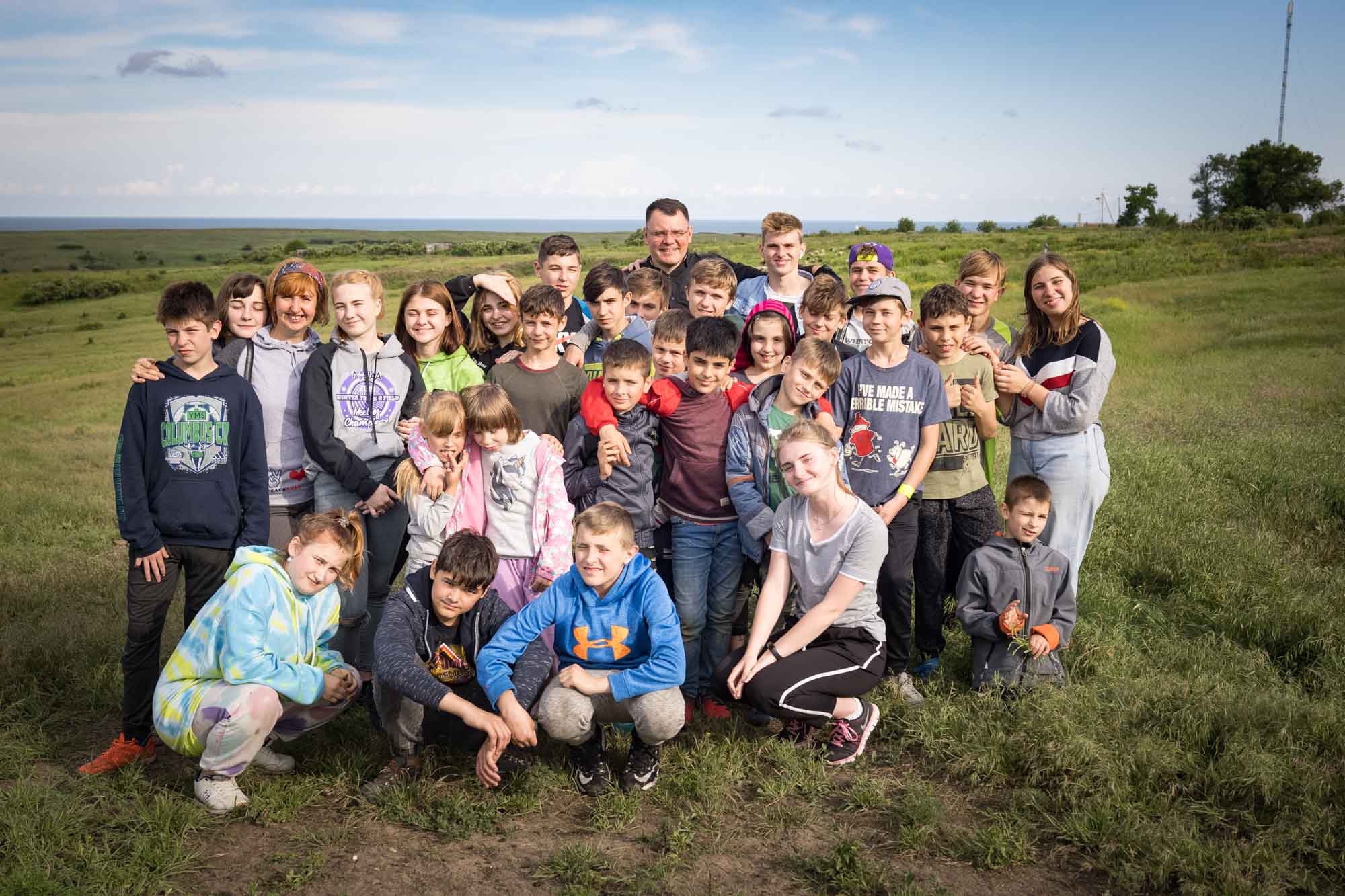 I am amazed but not surprised by what we found, I think these photographs and the following video tell the story well of our first day at Republic Pilgrim in Mariupol Ukraine. Our team loves it here and we are so excited to be traveling to the front lines tomorrow with Gennadiy. Becca will be doing video interviews and both of my cameras will be working overtime.

Video from our time at Republic Pilgrim…

In 2000, Gennadiy Mokhnenko, along with his wife and other members of their congregation, began delivering food to children on the streets. They were shocked to find that many of the children, even the youngest of them, were addicted to drugs and alcohol. Many were also infected by HIV, and unable to receive proper treatment. As time passed, Gennadiy and his church grew more and more impassioned about the children’s plight. They knew they needed to do more for these children than to simply visit them in their misery. Gennadiy began offering children shelter in an old, abandoned building. The church was later able to purchase and remodel the building into what is now Pilgrim Republic Children’s Home, a place of refuge, recovery, and rehabilitation. Today, they serve over 100 vulnerable children in Ukraine. They work to rehabilitate them from drugs, and give them opportunities to pursue their education, overcome trauma and rewrite their story.

Serving Orphans Worldwide travels to every ministry the partner with to ensure needs are legitimate and 100% of funds distributed goes to the livelihood of the children.

All the school aged children are enrolled in either public and private schools. Some of the children attend school on premises at Pilgrim Republic. This ensures that the children undergoing rehabilitation for drug and alcohol abuse are resocialized and able to cope well within the education system upon returning to permanent care.

As a result of its roots as a ministry of the local church, Pilgrim takes excellent spiritual care of its children. Children are not only healing physically from the struggles of their past. The local church also sees to it that they are healed spiritually during their stay at Pilgrim.

Pilgrim is recognized as the largest alcohol and drug addiction rehabilitation center in the country and it is continually rescuing the youth of Ukraine from  addiction. They have medical staff on site for basic needs. For serious medical emergencies, they are taken to a local hospital.